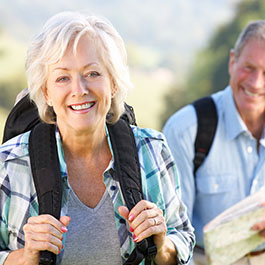 How  Attitude Can help you live longer – At A Cellular Level – Cutting Edge Research :Jeffrey Kluger

We hear sayings like “fifty is the new forty”  I even recall listening to a talk by Gloria Steinem who had turned 60 saying “look at me – this is the new 50”  So what does this mean.  How can we possibly be younger when we are not?

It is well know that our moods, feelings and thoughts all influence our physiology.  Learn to relax and your blood pressure goes down;  emerge from depression and your immune system picks up;  take a placebo that you’re told is a powerful drug for your headache or backache or infection and as if by magic, you get better.

If the mind can heal the body, can it also rejuvenate it?  Can it make it physically, measurably younger or, at the very least, slow the aging process?  The people who research such things already accept that the way we  think and feel can increase the population of disease-fighting white blood cells and lower the level of the hormone that raises blood pressure, so why couldn’t it help recalcify bones or reverse heart disease or preserve the brain cells that are lost with age?  So perhaps within reason, you’re only as old as you choose to be is fair comment, as the latest research is mounting that your outlook, your personality and frankly how upbeat you are have a profound impact not just on how you feel but also on how your cells age.

“Let’s treat mind and body as just words” says Ellen Langer, a professor of psychology at Harvard University who has been studying aging, mindfulness, decision-making and health since the late 1970’s.  “Let’s put them together as one thing and say anywhere you put the mind you also put the body.”  Once you make that leap, the medical tool kit becomes a lot larger.  It includes not just pharmacology and surgery but also things like meditation, optimism, resilience and social connections – all stuff that’s always been far outside medicine’s visible wavelength but suddenly is finding a place comfortably within it.  Consider one study for instance, showing that even a single day of a mindfulness meditation practice can down-regulate a gene that codes for inflammation, one of the greatest drivers of aging.  Or the one showing that reducing stress can reduce the cellular damage from the highly reactive oxygen atoms known as free radicals.  The  research that found, most remarkably that the telomeres within your cells – the little cuffs that cap chromosomes and erode over your lifespan can actually be made to grow longer, provided your mind is in the right state to make it happen.  It comes down to daily behaviour and the choices we make says Elissap Epel Professor of psychiatry at the University of California, San Francisco who studies of people from around the world showing that aging is not just an aspect of genetics but of how we live.  Deciding to live better, it increasingly seems is the same as deciding to live younger.

The Levers of Aging

Over the course of a lifetime, telomeres burn down like a sort of candle wick, leaving the chromosomes vulnerable to damage and starting the aging process.  Investigators have understood the basics of telomeres since 1978 when then postdoctoral fellow Elizabeth Blackburn now at UCSF first mapped their structure.  In 1984, Blackburn and her graduate student Carol Greider now at John Hopkins School of Medicine, discovered the enzyme telomerase, which repairs and maintains telomeres.  The discovery won all three of them the 2009 Nobel Prize for Medicine.  When studies look at which individuals will die in the next three years” Blackburn days, “The chances are higher if your telomeres are shorter.  Telomere shortening plays into cardiovascular disease, immune system problems and maybe diabetes by affecting immune system problems and maybe diabetes by affecting beta cells in the pancreas.  The question is “Are there ways to intervene to spare the telomeres and preserve your healthy?  The answer – yes and stress reduction is one powerful method.  Worse news, telomere-shortening stress is not confined to older people and does not even have to be experienced first-hand.  Babies whose mothers had experienced more stress when they were pregnant showed shorter telomeres than those who moms had easier pregnancies.

Telomeres aren’t the only big stress related players in the aging game.  Another chronic inflammation.  When you’re anxious, the sympathetic nervous system assumes you’re about to encounter a predator and send signals from the brain to the adrenal gland secreting epinephrine and cortisol.  Together these hormones signal the immune system to release proteins known as inflammatory cytokines.  These prepare white blood cells and other infection fighters to rush to the site of an anticipated wound.  So if you’re constantly stressed, the body produces inflammation as a side effect creating a friendly environment for cancer, brain deterioration, and cardiovascular disease.  The best way to deal with this is through meditation and mindfulness exercises.  Increasingly researchers are finding that a particular form of meditation known as mindfulness based stress reduction (MBSC) which, as its name suggests, includes paying close attention to feelings, thoughts and other stimuli while meditating can calm an inflamed immune system in the same way it can calm an inflamed mood.  In 2013 Richard Davidson a neuroscientist and the founder of the Center for Investigating Healthy Minds at the University of Wisconsin conducted a pair of studies showing just how powerful an effect MBSR can have on the body.  In one, he and his colleagues compared 40 subjects – 21 of whom engaged in eight hours of a combination of guided meditation, meditative walks and lectures on meditation and 19 of whom engaged in equally relaxing activities but without meditation.  At the end of even so brief a period as eight hours, the meditators showed a decrease in the expression of the very genes that regulate inflammation – meaning a decrease in inflammation itself too.  Davidson says “the regular practice of certain contemplative methods seems to be able to alter the trajectory of age-related changes.  Some studies even show that meditation can slow the age-related decline of gray matter in the brain”  On this last point, exciting research published in February out of UCLA compared two sample groups of 50 people ranging in age from 24-77 – a good demographic slice since our brain actually begins declining when we’re in our 20’s.  One group was made up of people who did not meditate; the other of people who had been regular meditators shows less gray-matter loss in several regions of the brain compared with the non-meditators.

Almost as powerful as meditation and certainly easier for people who would be perfectly happy to set aside time for solitary contemplation in a quiet place if they could find the hour and the place and be quiet – is simple optimism.  Challenges and setbacks and even tragedies are non-negotiable parts of life, but what is negotiable is how you face them.  Dr. Harry Tindle, a physician and clinical investigator at Vanderbilt University has produced a body of work on the connection between attitude and health and all of it points to the improbable power of just being hopeful.  In one massive 2009 study Tindle analysed data from 97 253 women who had filled out questionnaires for the National Institutes of Health’s Women’s Health Initiative, trying to correlate hopefulness and mortality.  Women who had scored high on optimism – being hopeful about the future – the results showed had significantly lower rates of heart disease, cancer and mortality than women who scored high on pessimism.

As with most matters, involving health, it comes down in large measure to lifestyle – diet, exercise, adequate sleep and positive attitude.  That’s not sexy but when it comes to longevity, take what works over what makes headlines.  So enjoy the time you’re got, and you might just get more of it.

The IE Group have developed modules on consciousness coaching and mindfulness to assist you in attaining peace, joy that can enhance the quality of your longevity.  For more information contact Kiley on (011) 7811444 or Kiley@iegroup.co.za

SUSTAINING EMPLOYEE WELLNESS
Mindfulness: Why being present at work and at home matters